One of the most challenging and rewarding breeding objectives in DC is the Breedable Exclusive, specially after LaW Update. 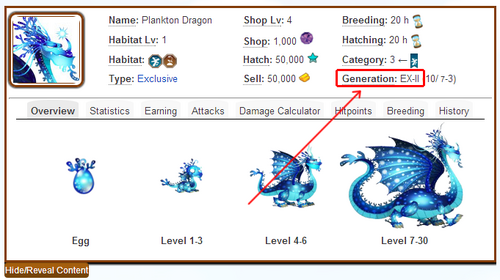 All EX generations with appendices are breedable:

Breeding Requirements will be maintained on the Breeding/Generations page.

The following methods have been tested, with varying degrees of success.

It is unclear at the moment if it is possible to breed Exclusives with Elementals, however, very limited success has been reported unless a Legend is one of the Parents. The Legend Method is therefore recommended unless you do not have any Legends.

To date, the easiest way to breed an Exclusive is by using a Legend as one of its Parents. This unlocks all Breedable Exclusives for selection as Offspring and unlocks all level criteria for Parents.

e.g., For Plankton Dragon, breed a Legend with a Sea Hybrid or a Terra Hybrid. Several attempts are likely necessary.

This method is less reliable.

Follow the criteria as stated for the Exclusive in the game Store. You are advised to level the Parents as high as you can for a better chance.

e.g., For the Plankton Dragon, the criteria is stated as requiring Level 10 parents. The next Parent Level criteria is 15, so Breed a Mud 14 with a Waterfall 14 for best chance. Then, there are the Exclusives that require level 20, with all of them being Tribrids, wich are almost impossible to breed without a Legendary. You may need to try many times.

The following examples are supplied by your fellow DC Players. "Chance" is supplied by players and not confirmed by staff. Use at own risk.

Retrieved from "https://dragoncity.fandom.com/wiki/Tutorial/Breeding_Exclusives?oldid=281854"
Community content is available under CC-BY-SA unless otherwise noted.