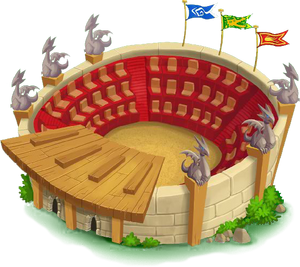 The Stadium is a Special Building where you can combat with your team of dragons. It costs 25,000

and requires 3 friends to open. Challenges open every 12 hours after the end of each tournament, with the first being available as soon as the Stadium is complete.

In November 2015, this Stadium became defunct. It was transformed into a Coliseum and has new tournaments.