When Deus was a child, he liked the art of Origami. One day he created a beautiful paper dragon, and he blew life into it. Since then, the Origami Dragon can be seen floating on thermal air currents high in the sky. 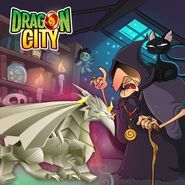