This page describes Combat Strategies that are used in DC. Feel free to share your experience and observations.

Let us use the Aztec Emperor as our Opponent. For reference: 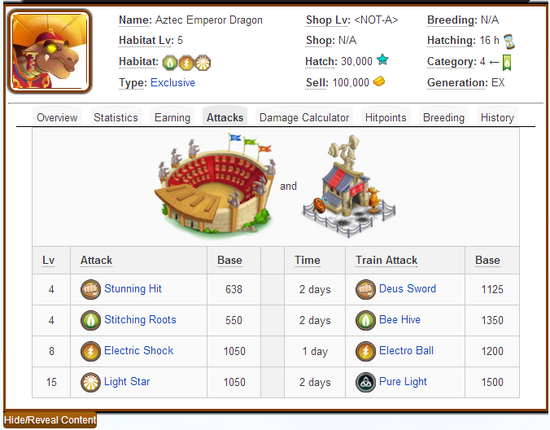 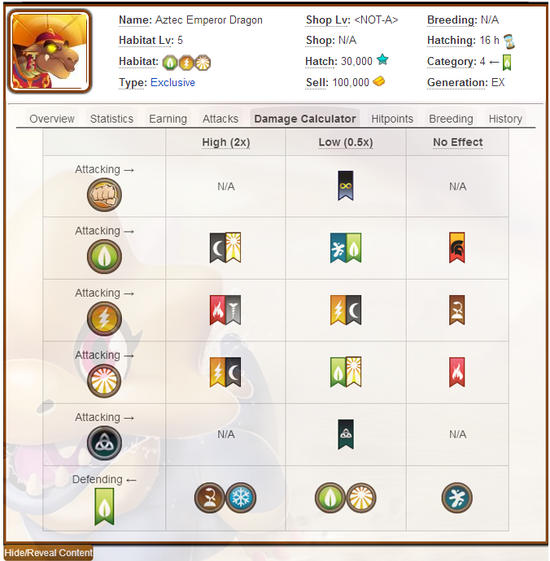 Relevant information for Battles in the Infobox:

You will only need a Terra Dragon or an Ice Dragon for a sure win.

The Attacks page is a quick look at Damage delivered by most Dragons, for comparison (among other things).

You could also post the following code on your wall, or your page, or your blog to see the results.

For example, to calculate the attack strength of a Lv15 Aztec Emperor with 2GS using Stitching Roots, post:

as a single paragraph (do not use line breaks / the Enter key) and get:

The values are not modified, i.e., double the values for Dark and Light Hybrids; half for Sea or Nature Hybrids. (See Fig 006)

You will notice from the code for calculating Damage that the Dragon's HP also has an impact on the Damage delivered. Due to this fact, the Opponent's HP is a good indicator of whether you or your Opponent will win.

Head over to Stadium before starting a Tournament, to find out the details about the Dragons you will be battling. Keep in mind that only the Anchor Dragon is predetermined. The Second Dragon you battle is determined by the Battle System AI.

Generally speaking, there are two types of Battles: Tourneys and Cups.

The Tourneys are usually preceded by an Element name and feature Battle Teams that consist of Dragons that share an Element -- i.e., a Terra Tournament features either a Terra Dragon, a Terra Hybrid (e.g. a Waterfall Dragon), or a Terra Secondary (e.g., a Paladin Dragon).

Some Cups are preceded by a gemstone name and feature Dragons that are perhaps expected to be more difficult to defeat. This may be a reference to the hardness of the stones. (On the Mohs Hardness scale, Emeralds are 7.5-8, Sapphires are 9 and Diamonds are a maximum 10.)

Other Cups are preceded by a Theme, i.e., Black Market / Exotic / Extreme.

In PVP Leagues, it is generally quite impossible to predict what Dragons you will be facing with 100% accuracy. As winning is important for those who participate for gems collection / Ranking the Dragons on the Attacking Battle Team, one method is to expect the worst-case scenario -- that your Opponents will be using their strongest Dragons.

The strongest attack Dragons are popularly believed to be Legends. This is actually incorrect, you will find out why shortly.

The point of a Battle is simple -- to be the Team with the last Dragon standing.

To achieve this, your Dragons will need to have at least one of the following:

If your Opponent can deliver Critical Damage to your Dragons, your position will be at greatest risk.

The only Dragons that do not receive Critical Damage from any Element are the ones with the Primary Element of Pure -- the Pure and Pure Hybrids.

The Pure / Pure Hybrids are also the maximum Category 5 Dragons, which means they are possibly the best Dragons for use in PVP Battle Team for Attacks.

Pure Sea delivers Critical to Flame, Electric and War Primaries. Combine the Pure Sea and two of the following in your Attack Team to have the ability to deal Critical to all but two Elements:

If you do not have access to Pure Dragons because you were playing below Lvl 18 before the LaW update, and have not yet reached Lvl 34, do not despair because:

Terra Hybrids are good for Combat at lower levels; so are Sea Hybrids. Remember that Sea Attacks deliver Critical Damage to three Elements. At higher levels, the Leviathan Dragon may also be useful until you can replace them with Pure Hybrids.

If you are facing a Defense Team that is hard to defeat, compare the Defense Dragons' HP with yours. It is a good guesstimate for the amount of difference in power you need to make up, because first and foremost your Dragons will need to outlast your Opponent's Dragons.

There are several types of Defense Teams on PVP:

This type of Team consists of a single Dragon, selected for its low level and ease to defeat. Advantage: Easy win towards gems. Disadvantage: Only a single win towards Ranking. Not much excitement here.

This Team consists of a single Dragon left behind on its own on the Defending Battle Team, possibly due to the others being Trained or Breeding. Advantage: Small advantage in it being the only Dragon to defeat. Disadvantage: Only a single win towards Ranking; the single Dragon may not be easy to defeat. (e.g., Pure Sea lv40)

A Nominal Team consists of up to three Dragons selected for low level and ease to defeat. Advantage: Easy win towards gems. Multiple wins towards Ranking. May be played over and over, by exiting the Battle at the last opponent. Disadvantage: May be boring after a while.

A Showcase Team consists of up to three Dragons selected to show off the Opponent's progress in DC. It may consist of Exclusives, Themed Dragons, non-Breedables, Rare Hybrids, etc. The idea is to let an Opponent know the success of the Player, and perhaps to invite a visit. Advantages: Very interesting to play against, and somewhat educational. e.g., it is not every day you get to Battle a set of Aztec Dragons or Egyptian Dragons. Disadvantage: You only get to Battle once, unless you do not wish to test the Dragons to the limit.

A Strong Defense Team usually consists of 3 Category 5 Dragons, at the maximum level the Opponent can afford. The Strongest Defense Teams consist of Pures rather than Legends. Advantages: Very good team to Rank your Dragons on. It is possible to Rank up your Dragons a lot, by refusing to fully defeat the Team. More useful for high level Players. Disadvantages: Difficult (and expensive) for the Defense to get the Dragons up to Lv40. To leave the Dragons at a certain Level in PVP, you would need to stop playing on that account after all the effort put into the game. The Attacker only needs Ranked Lv30s to defeat Lv40 Dragons.

Note: In choosing the members of your Defense Team, bear in mind that your Dragons will be limited to the Default Attacks that came with it. The strongest Attack Team is not necessarily the strongest Defense Team. (For e.g., the Pure Sea Dragon will not have any Pure Attacks in the Defense Team.) The only Pures with a Pure Attack by default are the Pure and Pure Ice Dragons.

The only time in DC when you will will be involved in 1-on-1 Battles are during Island Quests, where you are sometimes required to battle to obtain a Dragon prize, e.g., in Aztec Island.

There are two ways (other than Defeat) you can fight this sort of Battle:

When you use a lv4 Dragon with an attack that deals critical damage to your opponent, (provided they cannot deal you a critical as well) even though they get the first hit, you can still win with your critical attack. The damage from your attack at this level is usually double (or more of) your opponent's HP. Ideally, your Dragon's Primary Element should be immune to your Opponent's lv4 Elemental attack (Physical Attacks only deal half the damage of Elemental Attacks), but any Primary Element that does not receive Critical Damage from your Opponent will do.

Your Cactus Dragon vs Jade Dragon
Even if your Opponent has the first attack, a lv4 Jade Dragon doesn't have the Magneto Attack.

With a lv4 Dragon, you will win with a one-shot attack. At high levels, you will need to deliver 2 hits with Critical Damage, so make sure your Dragon can survive two hits from your Opponent!

Chance has an important role in Epic Wins. With first attack, it is possible to deal a crushing blow to the Opponent Dragon and defeat it before it deals any damage.

1: Low or no damage in defeating an opponent

DCW encourages you to share videos of your Epic Wins, in particular those of Type 2.